In the 2006 report it was recorded that St. Helier residents who attended a meeting made comments on various areas of concern, in this regard we have highlighted the concerns over transport as follows:

Transport: An issue that was raised on a regular basis was that of late-night transport. Most agreed that a fair proportion of problems occurred because of the length of time revellers spent waiting for transport once pubs/clubs had closed:

'If we did something about not having loads of drunken people queuing for a taxi late at night, this would solve most of the problems in town.'

'Public transport desperately needs to be improved, particularly at the Weighbridge.'

Late-night transport: Twelve people talked about the need to improve late night transport in order to get people out of town, quickly, safely and cheaply. Whilst some participants were quite sceptical about the likelihood of success in this area due to costs or engaging taxi drivers, improving late night transport was clearly seen as one of the biggest factors in addressing crime and anti-social behaviour in St Helier.

'I can't believe this still hasn't been sorted out!'

'If we did something about not having loads of drunken people queuing
for a taxi late at night, this would solve most of the problems in town.'

It is clear from the discussions that if we are to tackle the issue of late night transport then we need to ensure the safety of those providing the transport as well as the passengers.

Safer St. Helier Community Partnership moved forward with a new initiative to address the concerns expressed in the report.

The use of taxi marshals to reduce conflict and disorder at taxi ranks is becoming widespread in many places in the world. Results are almost exclusively positive with reduced crime and anti-social behaviour, improved customer satisfaction and improved perceptions of safety for both passengers and taxi drivers just some of the benefits being reported. 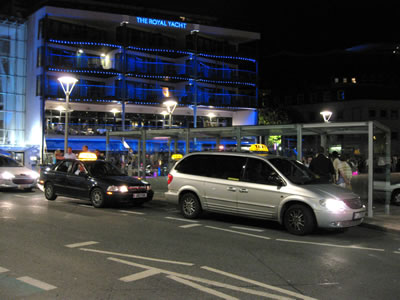 The Q-Safe Taxi Marshal scheme was developed following discussions between the Safer St Helier Community Partnership and the Jersey Taxi Drivers Association. The aim of the scheme is to provide supervision for the late night taxi queues at the Weighbridge, ensuring that queues are orderly and that queue-jumping and associated disorder are minimised. In turn it was hoped that this would make residents and visitors feel safer by preventing associated anti-social behaviour.

It was agreed with the Jersey Taxi Drivers Association that the marshals would be provided with direct communication to drivers. This has enabled them to update passengers on the approximate waiting time and also provides the marshals with a
means of contacting drivers regarding passengers who are unruly or unfit to travel.

A trial project was run between the 7th and 31st December 2007. Marshals worked between the hours of 11 pm – 4 am on Friday’s and Saturday’s. The results from the trial proved so positive that it was agreed that the scheme should continue. Since that time Q-Safe Taxi Marshals have been working at the Weighbridge taxi rank most Friday and Saturday evenings when funding has allowed. 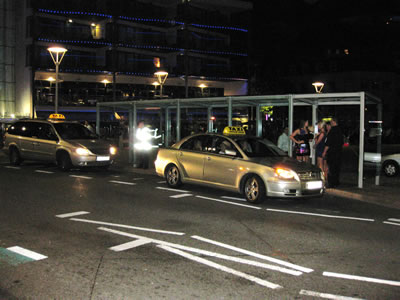 The results have been impressive. Latest official statistics from the States of Jersey Police show that they have only had to deal with four assaults at the taxi rank since the scheme began compared to 19 assaults over the previous 3 years. Reports of drunkenness and anti-social behaviour are also significantly reduced with 6 incidents so far this year compared to 53 incidents in the preceding 3 years. Furthermore, results from the evaluation of the pilot showed that the vast majority of people interviewed felt the scheme was making a positive difference. Many said it made them feel safer, in particular taxi drivers remarked that it made them feel safer and was likely to lead to more drivers willing to work the rank at weekends.

In February 2009 Acting Chief Officer David Warcup said: 'We welcome and fully support the introduction of taxi marshals. They have brought considerable benefits in increasing safety in that area.'

The SSHCP have been exploring innovative ways of raising funds for the taxi marshal scheme and in partnership with the Jersey Taxi Drivers Association, have been investigating the possibility of raising revenue through advertising on taxis.
The SSHCP requested the Minister for TTS to allow advertising on taxis similar to the way that advertising is allowed on the buses. The minister agreed to this with the provision that he had the final say on the type of advertising allowed and that the
funding and administration of the monies should be done directly through SSHCP.

Following a notice in the JEP in October 2008, a number of companies had expressed an interest in advertising in and on taxis. It is possible, with the agreement of TTS that the Taxi Marshal Scheme will have secured sufficient recurring funding to enable it to
run for the next three years at least.

The Q-Safe scheme has been continually monitored and evaluated for its effectiveness and the results from the data collected shows that there can be little doubt that the trial has been hugely successful; not only in reducing the actual anti-social
behaviour in that area, but perhaps more importantly in improving the quality of life of those living, working and using the area.

In May 2008, at the British Institute of Innkeepers Award ceremony, the Safer St. Helier Community Partnership was awarded the Parish of St. Helier Social Responsibility Award 2008 in recognition of the outstanding contribution that the Q-Safe Taxi Marshal Scheme has made to improving people’s quality of life in St Helier. 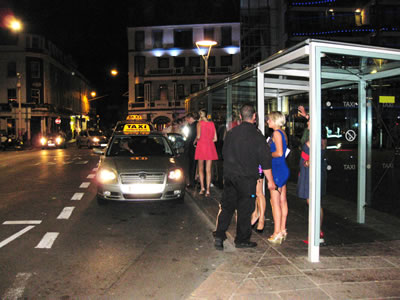 To allow the Q-Safe Taxi Marshals to continue until advertising revenue had been secured, the Constable of St. Helier, Simon Crowcroft, agreed at a meeting that the Parish of St. Helier would underwrite the cost of the scheme until sustainable funding was secured. This was on the understanding that PoSH would be paid back when sufficient funding was secured.

During July 2009 SSHCP requested the promise of underwritten payment made by the Constable of St. Helier, Simon Crowcroft in June 2008 to be honoured, only to discover that criteria had been put in place that SSHCP were not made aware of when the Constable's promise had been made.

Safer St. Helier Community Partnership have learnt a valuable lesson in working in partnership with the Parish of St. Helier.

We believe SSHCP have delivered and improved the late night safety environment in the weighbridge area through the successful introduction of the Q-Safe Taxi Marshals.

I’m sure you’re aware of the success of the Q-safe Taxi Marshal scheme at the Weighbridge, which has reduced crime and antisocial behavior on the rank by a significant amount. Latest police data shows that there have only been two assaults at the rank so far this year.

One of the key principles upon which the Safer St Helier Community Partnership works toward is that any initiative it introduces does not become an added burden on the tax payer or rate payer. With this in mind, for the past eighteen months we have been working with officers from Transport and Technical Services (TTS), Home Affairs; Taxi Driver Associations and private sector business developing a way in which the taxi marshal scheme can be funded through advertising revenue.

We gained approval from the Minister of TTS to undertake a trial of advertising on taxis and I am glad to report that we are going to launch this trial on Wednesday 7th October 2009. 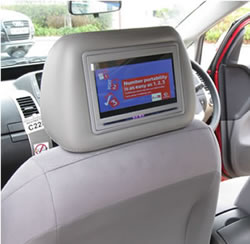 The funding of the Taxi Marshals is now paid by advertising on and in taxi-cabs through working closely with the Jersey Taxi Drivers Association, Transport and Technical Services Department, the Transport Minister and advertising agencies 360 Vision (Jersey) Ltd and Offshore International Advertising Ltd.

SSHCP business partners 360 Vision (Jersey) Ltd and Offshore International Advertising Ltd have guaranteed funding that will help to pay for the Taxi Marshals for at least three years. 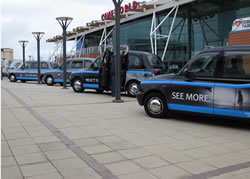 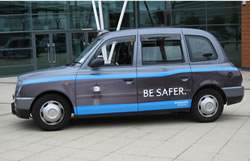